Although there were many rumors about everyone's favourite Sam Worthington playing Flash Gordon in the future project which is supposed to be helmed by Breck Eisner, it seems those really were nothing but rumors. "There is no validity to the rumors. Sometimes, as you know, studios tend to just scat ideas and they leak out – but its the first I have heard about it", Sam said to "Ain't It Cool News".
According to the false rumors Sam Worthington was in the contest together with Ryan Reynolds to play Flash Gordon an American football player who finds himself and his girlfriend as unwilling passengers on board a rocket ship heading to the planet Mongo, ruled by the evil Emperor Ming the Merciless. Since Reynolds already has "Green Lantern" and "Deadpool" on his plate,it seems he won't slide into the role either. 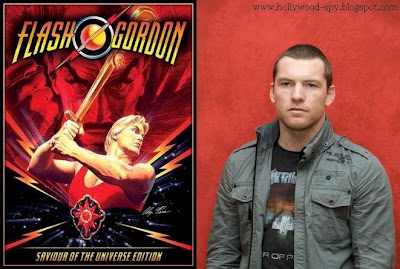 Here's what Breck Eisner said speaking about the project earlier this year: "The thing about 'Flash' is, you've got to throw away the 80s version of it. For me it's about reinventing 'Flash' - we're still staying true to the adventure origins of it, and the adventurous spirit in that movie, absolutely. It's this man brought to another planet and uniting the disparate groups on Mongo, but there is a gritty, intense, dynamic, active quality to the movie. Very modern. It's not camp."
To remind you, "Flash Gordon" was previously a remake plan of Stephen Sommers who would have been the perfect director for this project having just the right eye for highly entertaining glamorous adventures and special effects. Sam Worthington still didn't say anything about him playing Captain America, which is also one of the hottest rumors around Hollywood.
Posted by DEZMOND at 7:22 PM