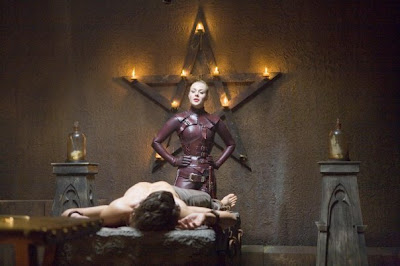 Gorgeous Mord'Sith Denna (a stunning performance by lovely and charismatic Jessica Marais), a dangerous beauty dressed in tight blood-red leather who can manipulate any form of magic directed at her, one of the most interesting characters from the first season of the popular fantasy show "Legend of the Seeker" is back this Saturday in the 9th episode of the second season entitled "Resurrection". She comes back with a surprise and Richard the Seeker becomes an unwilling pawn in her plot to control the throne Darken Rahl’s death left vacant. Another TV beauty Jolene Blalock ("Star Trek Enterprise's" T'Pol) will also appear in "Seeker" later this month as a mysterious Sister of the Dark with some serious magical powers and will attempt to end Richard's quest to stop the vile forces from the underworld but her real goal will be to destroy Kahlan.
Meanwhile, you can check out the trailer for tomorrow's episode with Denna.