SAM RAIMI JUMPS FROM "SPIDERMAN4" TO "WARCRAFT: THE RISE OF THE LICH KING"

After quitting "Spiderman IV" it seems Sam Raimi's next project will be "Warcraft". Here's what one of the insiders said in an interview for "Ain't it Cool News":
Well, I chatted with someone that knows - and I feel confident in saying that the next film we'll see from Raimi is going to be Warcraft... which after Avatar, the concept of world building that particular universe could be astonishing - especially in 3D - especially after what Cameron just unleashed upon the globe. World creating Science Fiction & Fantasy... done by visionary filmmakers ... well, it is a premium. We got The Hobbit coming, looks like an Avatar 2... but the word I hear is that today - the phone lines were burning between a certain legendary locale (Legendary Pictures producing the movie) and Raimi's folks about firing up the furnaces to forge the weapons of war. 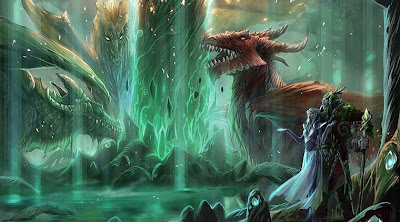 Here's the story of the future "Warcraft: The Rise of The Lich King" movie: Lord of the undead Scourge, wielder of the runeblade Frostmourne, and enemy of the free peoples of Azeroth, The Lich King is an entity of incalculable power and unparalleled malice and his icy soul is utterly consumed by his plans to destroy all life on the World of Warcraft. But it was not always so. Long before his soul was fused with that of the orc shaman Ner'zhul, the Lich King was Arthas Menethil, crown prince of Lordaeron and faithful paladin of the Silver Hand. When a plague of undeath threatened all that he loved, Arthas was driven to pursue an ill-fated quest for a runeblade powerful enough to save his homeland. Yet the object of his search would exact a heavy price from its new master, beginning with a horrifying descent into damnation. Arthas's path would lead him through the arctic northern wastes toward the Frozen Throne, where he would face, at long last, the darkest of destinies.
Posted by DEZMOND at 9:32 PM