JAMES MCAVOY AS IAN FLEMING IN THE NEW BIOPIC

As "Pajiba" reports a biopic based on the life of Ian Fleming, is currently under development. "Ian Fleming" will be about the man behind James Bond, 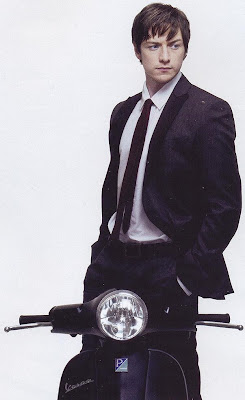 specifically focused on the years that gave him inspiration for the Bond character. Before creating Bond, Fleming lived under the shadow of his father, who was a member of Parliament, and his brother, who was a travel writer. Without his own identity Fleming was just a vain playboy, until his experiences in World War 2 as a member of British Navy changed his life giving him inspiration for James Bond.
The movie is going to be based on the book "Ian Fleming: The Man Behind James Bond" by Andrew Lycett, and will have a budget of about $40 million. One of the most talented young actors James McAvoy ("Narnia", "Atonement", "Wanted"), who was apparently in competition to play 007 himself before it became James Craig Blond, will take the lead role.
Posted by DEZMOND at 9:19 PM