JASON MOMOA IS THE NEW CONAN, MICKEY ROURKE MIGHT PLAY HIS FATHER

Last week we informed you that the upcoming remake of famous "Conan" had two young actors competing for the tittle role, but now it seems Jason Momoa ("Stargate Atlantis", "Baywatch") has signed on to play the glorious barbarian in the epic adventure.The studio was choosing between him and Kellan Lutz, 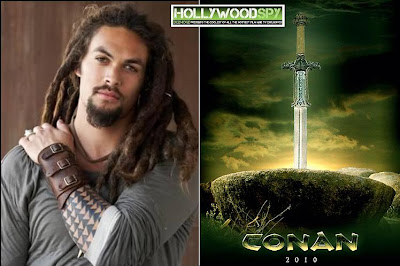 but apparently Momoa got the support of director Marcus Nispel by filming a few scenes wielding a giant sword. It also seems that Mickey Rourke could possibly play Conan's father, Codril. An offer has been sent to Rourke, but it still isn't clear if he will accept it or not.
The movie will start production on March 15th in Bulgaria.
Posted by DEZMOND at 9:20 PM