Since it seems this could be a year of beautiful historical movies with "Clash of the Titans", "Centurion", "Eagle of the Ninth", "Solomon Kane", "Robin Hood" and other epics, here's another thing to 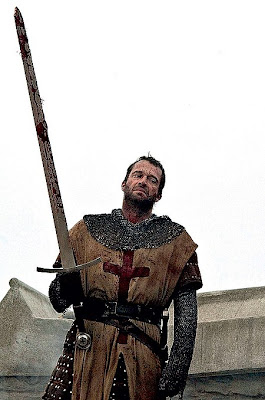 cheer us up - the first pic of dashing James Purefoy with his ginormous sword from a very promising medieval action "Ironclad". Premiering later this year the movie stars James Purefoy, Paul Giamatti, Richard Attenborough, Robert Carlyle, Bob Hoskins, Brian Cox, William Moseley, Jason Flemyng ...
The story is set in the year 1215 when the rebel barons of England have forced their despised King John to put his royal seal to the Magna Carta, a noble, seminal document that upheld the rights of free-men. Yet within months of pledging himself to the great charter, the King reneged on his word and assembled a mercenary army on the south coast of England with the intention of bringing the barons and the country back under his tyrannical rule. Barring his way stood the mighty Rochester castle, a place that would become the symbol of the rebel's momentous struggle for justice and freedom.
I'm happy as a kid, what about you? :))
Posted by DEZMOND at 9:04 PM