STUART TOWNSEND LEAVES THE ROLE IN "THOR" TO JOSHUA DALLAS

Huh, Stuart Townsend really doesn't have luck. According to "The Hollywood Reporter", he has left Marvel Comics' movie adaptation of "Thor" over "creative differences". He was supposed to play Fandral, an ally of the Norse god Thor. Just days before the official start of the shooting he has been replaced by equally dashing but pretty much unknown Joshua Dallas. 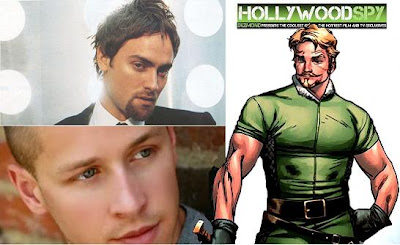 The weirdest thing in the whole story is the well known fact that Stuart Townsend had the same experience with "The Lord of the Rings" where he had been cast as Aragorn but was similarly replaced at the last minute by Viggo Mortensen.Let's hope Joshua will prove himself a worthy replacement.
As you know at the center of the movie is The Mighty Thor, a powerful but arrogant warrior whose reckless actions reignite an ancient war. Thor is cast down to Earth and forced to live among humans as punishment. Once here, Thor learns what it takes to be a true hero when the most dangerous villain of his world sends the darkest forces of Asgard to invade Earth.
Posted by DEZMOND at 9:21 PM