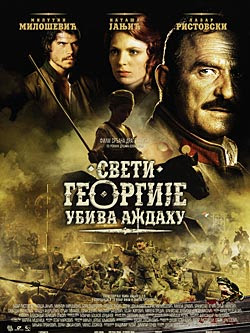 This magnificent anti-war drama set in WW1, one of the most expensive Serbian films ever, describes Serbian mentality and history in a metaphorical way using complex sets, stunning landscapes, flawless costumes and make up, rich cinematography, emotional music scores, profound acting and a haunting conclusion at the end of the movie.
The movie starts with a battle against the Turks during the First Balkan War in 1912 and ends with the outbreak of WWI in 1914 and the crucial Battle of Cer, the first allied victory in WWI. It is largely set in and around a small village at Serbia's border with Austria-Hungary. The village is divided between able-bodied men that are potential army recruits and the many invalid veterans from the previous wars and there is bitter animosity between the two groups, which don't intermingle much with each other even though they live in the same village. 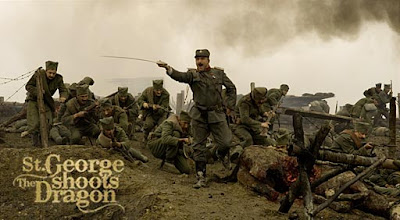 The central theme of the movie is a love triangle between the village gendarme Đorđe, his wife Katarina and the young war cripple Gavrilo who once had a love affair with Katarina before he went to war and lost his arm in battle. Even though Katarina married Đorđe in the meantime, she still has affection for Gavrilo, which is a source of friction between the two.