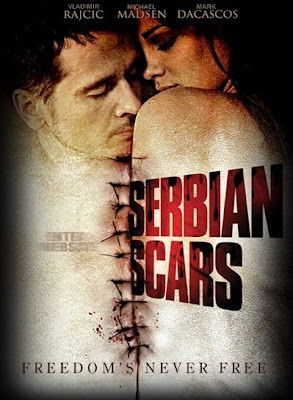 The movie was well received by the critics and the audience and at the Los Angeles Premiere last October at the AMC theater Century City so many people showed up that the Fire Marshal Office of L.A. County came to shut the event down and the producers had to turn away over 300 people in order to go on with the event.
The story of "Serbian Scars", set in Belgrade, Chicago and Kosovo, chronicles the complicated relationship and reunion of estranged brothers, Alex and Peter and the forbidden love of a Serbian Soldier (Alex Obilich played by Vladimir Rajcic) and a young Muslim woman (Jana Milic). Alex, believing his father (Goran Obilich played by Steve Agnew) to be at deaths door and in need of a bone marrow transplant, ventures from Serbia to Chicago to find his brother Peter (Mark Dacascos) in an effort to save their dying dad. Peter escaped from Serbia with their mother years ago leaving behind his brother and father to fight in the war. With the help of an American CIA operative, Alex finds his brother in Chicago. What Alex does not realize is that their father is being used as a tool by a terrorist named Dreq (Michael Madsen), who thinks that Peter holds the key to a devastating chemical weapon that their father developed under duress for the Soviets during the Cold War. Goran Obilich is prepared to sacrifice everything to make sure that the chemical weapon will never fall into terrorist hands. Alex convinces his brother to return to Serbia where they discover that Alex's Muslim girlfriend has become a pawn in Dreqs deadly game. Secret alliances are revealed and hidden identities become known as the brothers discover that freedom is never free.

Check out the trailer bellow and the haunting Serbian ballad "Gde ljubav putuje" ("The Voyage of Love") the main song from the movie, above.