OK, so you all know who were the winners and the losers at last night's Golden Globes, yes? So let's spice things up with a much more interesting topic - who were the fashion winners and losers? If you click on these pics you will see HOLLYWOOD SPY's official lists of best and worst dressed celebs at Golden Globes 2010. 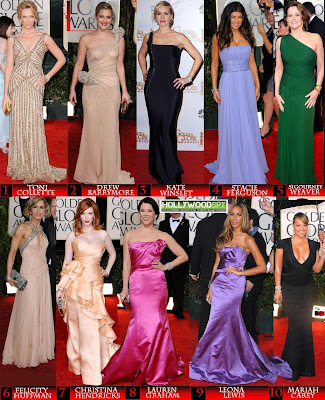 Without any doubt the best looking lady of the evening was the best comedy actress Toni Collette, who turned from duckling into swan in her stunning Elie Saab (my favourite designer) golden dress. Then comes Drew Barrymore who was looking better than ever in her sensational Versace beaded gown. Kate Winslet oozed elegance as always, Fergie and Sigourney wore some lovely colours, although Fergie would have looked better with a better hairdo, Felicity Huffman had an amazing dress while Christina Hendricks managed to emphasize her seductive curves in the most flattering way. Lauren Graham's gown matched perfectly with her porcelain tan, while British rose Leona Lewis looked like a flower in her lilac dress. Mariah Carey has managed to squeeze her stunning body in that tight little number which took both her and our breath away. 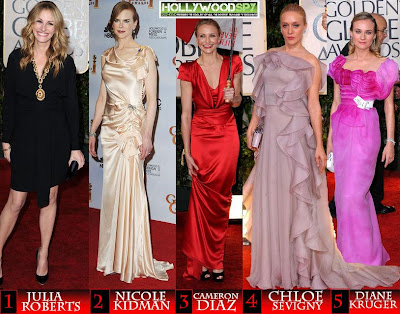 The freak of the evening was Julia Roberts looking like she dressed up for beach, but she never had any style to start with. Nicole Kidman didn't shine with the bad make-up and horrible dress, 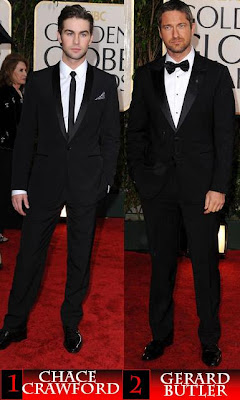 while Chloe Sevigny looked like she was swallowed up by ginormous ruffles. Cameron Diaz and Diane Kruger wore items which cannot be defined nor described.
And who were the best looking gentlemen of the evening. Young Chase Crawford looking dashing in his modern suit and Scottish hunk Gerard Butler looking handsome in his classic outfit. So what did you think, who were your fashion favourites? Fell in love with anyone's dress or suit? Got nightmares from anyone's freakish appearance?
Posted by DEZMOND at 10:23 PM