ROBERT LUKETIC HELMING THE REMAKE OF "ROMANCING THE STONE"

Together with "Mad Max", "Ghostbusters", "Karate Kid" and "Overboard", it seems that yet another cult 80's movie is getting its remake. 20th Century Fox has apparently decided to make a new version of famous adventure "Romancing the Stone" and according to "Pajiba" Dan McDermott ("Eagle Eye") had been given the task of coming up with a script which he has already concluded. 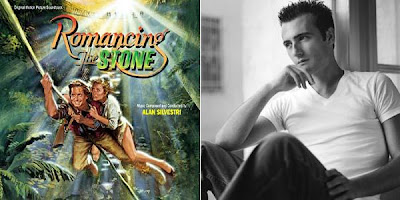 The original movie was directed by Robert Zemickis, starring Michael Douglas and Kathleen Turner as the popular tandem and the movie had two sequels "The Jewel of the Nile" and "The War of the Roses". "Romancing the Stone" is an action-adventure story about a romance writer who sets off to Colombia to ransom her kidnapped sister, and soon finds herself in the middle of a dangerous adventure.
The remake is supposed to be helmed by charming Robert Luketic (the director of Australian/Serb-Croatian origin, famous for his romantic comedies like "The Ugly Truth", "Legally Blond" and "Monster-in-Law"). He also has Barbarella in plan but since "Romancing the Stone" already has a finished script it might be done before the adventures of the kitschy space tart which nobody really wants to see.
Posted by DEZMOND at 12:03 AM