KELLAN LUTZ AND JASON MOMOA SHALL WIELD THE SWORD OF CONAN? 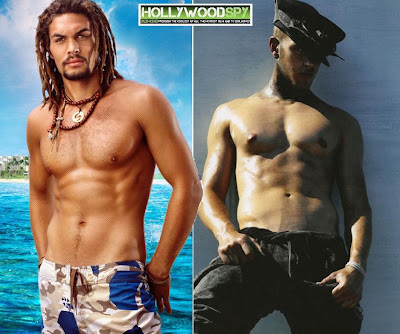 The remake of famous "Conan" epic adventure is approaching the start date of its production helmed by Marcus Nispel ("The Texas Chainsaw Massacre", "Friday the 13th")and now we have two hunky finalists in the running for the leading man role. Looking to replace infamous Arnold Schwarzenegger are famous heartbreaker Kellan Lutz ("Twilight", "BH90210") and Jason Momoa ("Stargate: Atlantis", "Baywatch", "Games of Throne"). But although they are in the strong run apparently there is a third, more-established actor who is being considered in the first place, but the actor's name still hasn't been revealed. The shooting of the movie begins on March 15th in Bulgaria, and you can find the plot of the upcoming movie in one of the previous HOLLYWOOD SPY's posts.
Posted by DEZMOND at 9:39 PM