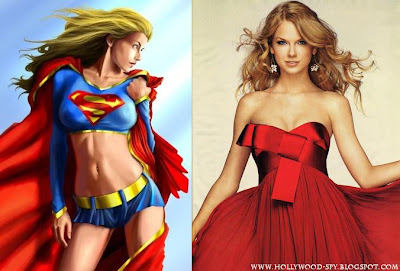 Believe it or not, but that's what one of the hottest gossips says - country cutie Taylor Swift might play Supergirl, aka Kryptonian Kara Zor-El, in the possible remake which currently has a very scary tittle: "Supergirl: The Love Story". Despite having only one movie role in her CV so far (she plays the love interest of another Taylor, but this time Lautner, in the upcoming star studded romance "Valentine's Day")she is currently occupying number one spot on the list of young actresses currently being considered for the role. One of the insiders has revealed recently: "A number of young stars are being mentioned for the title role in a 'Supergirl' movie and possible TV spin-off and Taylor is on top of that list. She has all the right elements to be a positive role model to young girls."
The original film from the '80s, starred Helen Slater in the supergirl costume. The critics hated it and the public ignored it massively, but Hollywood is short of female heroes and this particular one could be appealing to female viewers. What do you think about this? Do we need it? Can Taylor do it? Will Kanye play the villain? :))
Posted by DEZMOND at 11:34 PM