One of the most popular news around the Net these days is the one about actor Jeremy Renner ("The Hurt Locker", "28 Weeks Later") talking about the Hawkeye superhero and the possibility of the character appearing in the future Marvel movies. According to Renner he was in consideration for the role of Captain America but during an interview at Marvel Studios, they talked about Renner possibly playing Hawkeye, the purple Archer, instead. 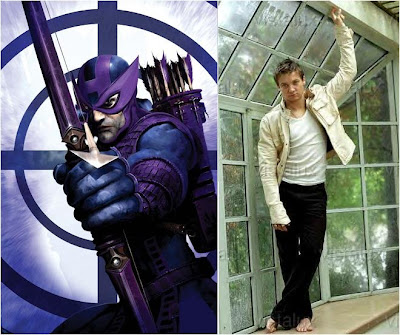 “I don’t know if I’d be right for Captain America. I met with the Marvel guys, actually, but we didn’t talk about Captain America. But one of the writers, Zak Penn, we’ve become friends over time and he was thinking maybe Hawkeye could be interesting. He sounds like an interesting character. I’m just happy to get considered for big franchise roles like that… I’m not doing the casting. If they see me that way, right on. If they don’t, I’m ok with it", Renner said about the whole buzz. The most probable option is for the Hawkeye to appear in the future adaptation of "The Avangers" although there were rumors that he might appear in "Iron Man 2" or "Thor".
Posted by DEZMOND at 10:12 PM