The latest gossip coming from New Zealand says that director Peter Jackson is secretly developing the movie based on the fantasy novel series "Mortal Engines" written by Phillip Reeve. The adaptation of the first book in the series is apparently underway, with Jackson's "Weta" already making the designs for the film which basically follows the story about a series of moving cities. It seems that Jackson has had the movie rights to the novel for some time. 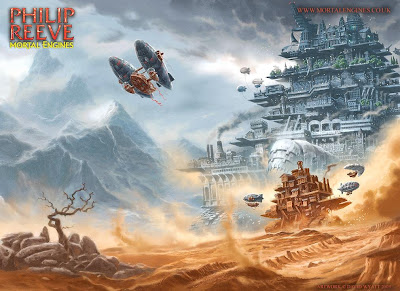 All the books in "Mortal Engines" saga cover nearly twenty years in the history of the Traction Era, a far-future age when cities move about hunting smaller mobile towns and dismantling those they catch for their raw materials. Airships ply the skies, amphibious limpet-submarines lurk in the oceans, and dangerous bits of technology left over from a long-ago war lie waiting to be discovered and put to use in the looming conflict between the cities and their anti-tractionist enemies.
Phillip Reeve has also written another fantasy book "LarkLight" which we wrote about some time ago as the $200 million movie project given to amazing Shekhar Kapur to direct.
Posted by DEZMOND at 10:14 PM