Although it seems his only good movies were the ones from "The Lord of the Rings" trilogy, since both "King Kong" and now "The Lovely Bones" have proved to be disastrous and confusing, Peter Jackson is apparently planning a new project. 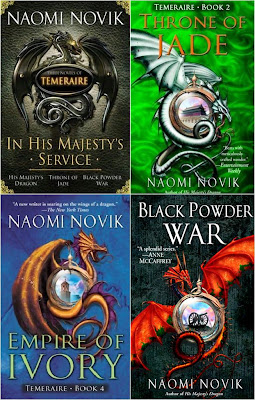 There are rumors that it might be "Temeraire" - an adaptation of a fantasy novel series by Naomi Novik that has long been thought as a project Jackson would helm. The series, which deals with alternative past, is set during the Napoleonic Wars, with the addition of an air force of dragons and aviators. The story begins when a British naval captain captures a French ship and discovers an unhatched dragon egg in the hold. This egg is a gift from the Emperor of China intended for Napoleon and when the egg hatches, the captain is forced to give up his naval career to become captain of the dragon he names Temeraire. Jackson is now thinking of doing it in the form of a big-budget television miniseries.
"Temeraire" novels have been published in Serbia by "Alnari".
Posted by DEZMOND at 9:12 PM