The first trailer for Ridley Scott's medieval epic has hit the Net today. Starring Russell Crowe, Cate Blanchett, William Hurt, Matthew Macfadyen and Max von Sydow, the movie opens May 14th 2010. "Robin Hood" follows a love triangle which forms between the legendary Robin Hood, his Maid Marian and the archer's arch nemesis, the Sheriff of Nottingham. Crowe stars as the Sheriff of Nottingham in a scenario that sees him more noble lawman than an evil king's right-hand man and facing off with a more shadier Robin Hood in the Sherwood Forest. 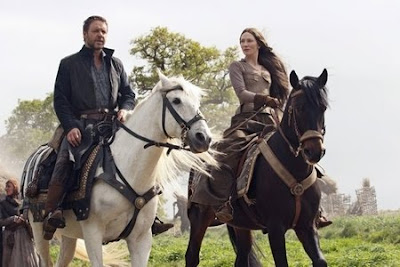