"SHOWTIME" GETS READY FOR "THE VANDERBILTS" HISTORICAL SAGA

The channel which has brought us some of the best shows recently - "Showtime", impressed with the enormous success of their royal drama "The Tudors", which ends next year, has now decided to focus on 19th century royalty with a new series "The Vanderbilts". 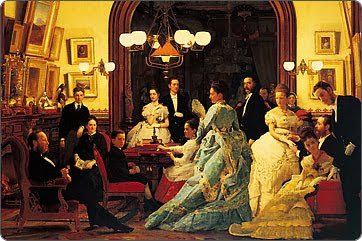 As "The Hollywood Reporter" reports, Julian Fellows (who won an Oscar for "Gosford Park") has been hired to write the project, a period story that follows the family behind the Vanderbilt railroad and shipping empire, starting with Cornelius Vanderbilt, once one of the wealthiest men in the world.
I hope that "Showtime" is also sticking to their idea to make "Camelot" show as well. We need more historical shows and glamorous dramas.
Posted by DEZMOND at 10:15 PM