HAWKMAN SHALL SPREAD HIS WINGS ON THE BIG SCREEN?

New day, new superhero movie. According to "Pajiba" Warner Brothers and DC Comics are teaming up to bring Hawkman up on the big screen. 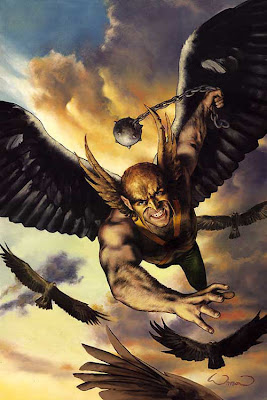 It seems that the whole comic book adaptation is planned as a mix of "Indiana Jones", "Da Vinci Code" and "Ghost".
Although not extremely popular, Hawkman is an interesting character which uses archaic weaponry and large artificial wings that allow him to fly. Hawkman also has a partner and romantic interest, Hawkgirl who helps him fight against supervillains. He's an archaeologist, adventurer and the reincarnation of an Ancient Egyptian prince. He also has a mystical cloak capable of teleporting anyone or anything enveloped within it folds. His uniform is made of Nth metal which brings him increased strength, speed, agility, resistance to cold and heat, accelerated healing, heightened senses.... What do you think about it? Who could play him? Who could be his Hawkgirl?
Posted by DEZMOND at 9:40 PM