PETER JACKSON SAYS CATE BLANCHETT MIGHT APPEAR IN "THE HOBBIT" 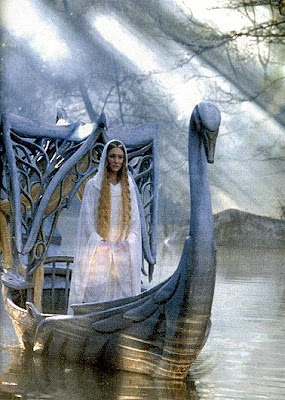 Taking to MTV Peter Jackson has revealed some updates regarding "The Hobbit" casting, scheduled for this week. It was already announced that Ian McKellen is going to reprise the role of Gandalf, since being a 2,000-year-old wizard, his character is still around and plays a major role in "The Hobbit", and that the producers are looking to cast anonymous actors for most roles in the film. But Peter Jackson also added some other news: "There's a couple of other characters: Elrond, who was played by Hugo Weaving in "The Lord of the Rings" and there's a possibility of Galadriel, who was played by Cate Blanchett. In some respects, it's a prequel. In book terms, the world of 'The Hobbit' takes place 60 years before 'The Lord of the Rings,' as it was written by Tolkien. So, not a lot of the characters actually feature, because they weren't around yet."
Being the narrator and the elven queen of Lothlorien, Blanchett has given the profound magic note to the LOTR movies, so it would be more than amazing to see her in "The Hobbit" as well. The shooting of the Guillermo del Toro-directed films is scheduled for April or May. The first movie is targeted for a Dec. 2011 release followed a year later by the second in Dec. 2012.
Posted by DEZMOND at 10:26 PM