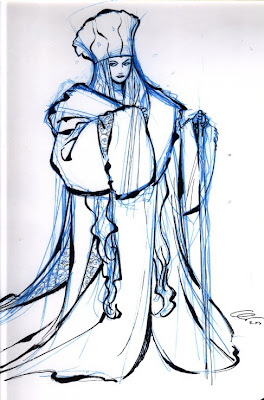 After the audience has warmly accepted "The Princess and the Frog" and with "Rapunzel" and "Winnie the Pooh" in preparations, it seems that Disney is really sticking to its plan to release a new hand-drawn animated movie every two years. What after that? It seems that Disney wants to dust off an old project that was previously started and then stopped: "The Snow Queen". It is a well known fairy tale from famous Hans Christian Andersen that basically tells the story of the power of love with little girl Gerda who will fight to bring her friend Kai back home after he goes to the Snow Queen enchanted by her powers. "SlashFilm" has published the first concept art image of the Snow Queen (in the picture left, looks like a cook to me :))) and has also learned that Alan Manken, the composer who made musical miracles in "The Little Mermaid" and "Beauty and the Beast", is working on the music for "The Snow Queen".
Posted by DEZMOND at 9:13 PM