Reading his blog BUZZESCAFE my Asian friend Jaccsy has inspired me to mention "The Treasure Hunter" in HOLLYWOOD SPY. This adventure is coming out this December in Asia and presents an interesting mix of "Mummy" and "Indiana Jones" with its breathtaking scenery and amazing fighting scenes. You can see the cool trailer for this movie over at my YouTube channel. 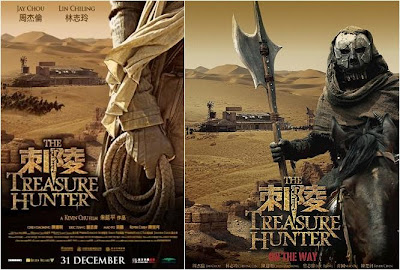 "The Treasure Hunter" is set in the northwest desert where countless prosperous dynasties have ruled and flourished in the past centuries, so there is rumor of a treasure of unbelievable riches buried among it. A group of mysterious guardians have been guarding the map to the location of the treasure until a fierce rivalry erupted. A notorious international crime group, The Company, hunted down the map keeper and before they managed to secure the map, the keeper passed the map to a young chivalrous man Ciao Fei (Jay Chou). He was forced to give up the map to save the life of his mentor’s daughter. Teaming up with her and a famous archaeologist he embarks on a dangerous journey to recover the map and fight to protect the ancient treasure. Jay Chou will become more familiar to Western audiences after playing Kato opposite Seth Rogen in the upcoming adaptation of "The Green Hornet".
Posted by DEZMOND at 10:26 PM