"SPARTACUS: BLOOD AND SAND" GETS SECOND SEASON EVEN BEFORE THE FIRST ONE HAS PREMIERED! 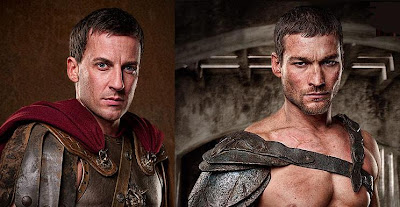 Although the premiere of the show is set for January 22nd, "Starz" executives have just announced plans to order a second season of the ground-breaking new series "Spartacus: Blood and Sand". The unusual timing of the renewal, more than a month before the debut of the anticipated show, promises a highly entertaining programme. Shot using virtual environments in the graphic novel style seen before only in cinema blockbusters like "300", the new show, produced by Sam Raimi, has a hyper-realistic look and an entirely new vision of the ancient legend.
Here's what one of the producers said: "We couldn't be happier with the first season. Spartacus delivers on all levels - action, characters, intrigue, romance and excitement. Spartacus is the most ambitious original project we've ever undertaken, and speaks to the commitment to our subscribers to provide truly original programming along with our unmatched lineup of theatrical features. The slave rebellion led by Spartacus and the oh-so-current political intrigue and personal dynamics laid out in the first season provide rich source material for the second season and beyond."
Judging from the scenes circling around the Net, it seems that "Spartacus" will also have some extremely sexy and naughty action and you can expect Lucy Lawless, the main female star of the show, revealing more than you dreamed of. The production on 13 new 2nd season episodes will start in New Zealand in the first quarter of 2010.