After developing his CG design skills in "Avatar" will James Cameron find a good use for them in "Battle Angel Alita"? The good news is that the project has started its development, although it's all in very early stages. Cameron talked recently about it to MTV News.
"The mixture of live-action and CG is a little trickier in 3-D than it is 2-D. Now we see it's good to have done Avatar first before Battle Angel, because the tricky scenes are where you're blending live-action photography, stereoscopic photography and CG.Shooting live stuff in 3-D and then adding CG characters and landscapes beyond that, that's a little tricky," said Cameron. "We're not that far down the line. We have a very good script and we've done a lot of production design. We've done about a year of production design and we've put together an art reel that shows the arc of the film. It's pretty much just add water and we're ready to go." 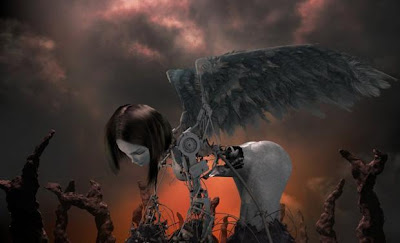 In "Battle Angel Alita" people and cyborgs of the Scrap Yard live beneath the flying city of Tiphares, whose inhabitants dump their junk in the Scrap Yard and rule above it's inhabitants. One day doc Ido, a former Tipharean citizen, finds the intact head of young cyborg-girl in a vast pile of scrap. He takes her in and gives her a body and the name Alita. Alita then discovers since long forgotten fighting techniques hidden in her body and decides to become a hunter-warrior like Ido.
Posted by DEZMOND at 9:04 PM