British beauty Emily Blunt has won our MOST STARLICIOUS YOUNG ACTRESS poll, becoming HOLLYWOOD SPY's most promising actress to take over the throne of Hollywood in the future. Having Cate Blanchett, Meryl Streep and Nicole Kidman as her favourite actresses, Emily has also shown that elegant and profound acting talent combined with the refined, almost angelic looks and spellbinding charisma. You've seen her in DEVIL WEARS PRADA, THE YOUNG VICTORIA, and you'll be seeing her in THE WOLFMAN, GULLIVER'S TRAVELS and GNOMEO AND JULIET. She is in love with John Krasinsky, and her best friend is Anne Hathaway. She's won a Golden Globe and was nominated for Oscars and Baftas. 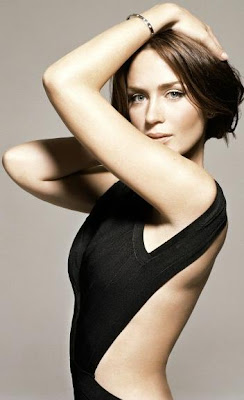 Our new poll begins today dealing with a very sensitive issue. There are so many talented actors who never get to become major stars, while some less deserving people rule the A-league. The new poll is dedicated to the most underrated actors in Hollywood. Four great guys who still haven't become the best payed and highest rated stars although they've proved their stunning talents millions of times and have all that it takes to rule the cinemas: two Australians Eric Bana (TROY, STAR TREK, MUNICH, THE OTHER BOLEYN GIRL) and Karl Urban (STAR TREK, LOTR, PATHFINDER, DOOM, THE CHRONICLES OF RIDDICK), Britain's own Paul Bettany (DOGVILLE, INKHEART, LEGION, THE YOUNG VICTORIA, WIMBLEDON) and amazing American actor Patrick Wilson (ANGELS IN AMERICA, LITTLE CHILDREN, EVENING, RUNNING WITH SCISSORS, WATCHMEN). You can vote multiple times, the voting is on next two weeks.
Posted by DEZMOND at 9:54 PM