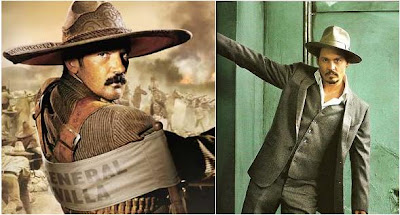 One of the most respected and critically acclaimed European directors, Serbian filmmaker Emir Kusturica, has been developing a project about Pancho Villa for many years now. It seems that he has finally managed to sign in Johnny Depp to take on the challenging leading role. The upcoming biopic "Seven Friends of Pancho Villa and the Woman With Six Fingers" will also star Kusturica's close friend Salma Hayek.
The film will revolve around an early 20th Century bandit who became a guerrilla fighter and hero to the poor. The story will recount how Villa and his loyal companions had the time of their lives robbing from the rich, partying, dancing, drinking Tequila, and making love. The film will begin shooting sometime after 2011.
Emir Kusturica, who broke records winning the Golden Palm at the Cannes Film Festival two times, has been a good friend with Depp since early 90's when Johnny starred in his movie "Arizona Dream".
Posted by DEZMOND at 9:32 PM