Television news for you this Sunday, starting with the royal gossips coming from Istanbul's Topkapi palace which say that Beren Saat could be replaced in the second season of the worldwide hit saga KOSEM SULTANA by Turkey's best paid TV star Nurgül Yeşilçay! I must admit I'd welcome the replacement given how much the audience was dissatisfied with Beren's lack of any interest in giving some depth or personality to her portrayal of the 17th century sultana Kosem who ruled Ottoman Empire through her husband and later on her sons. With her shocking lack of expression and acting chops Beren has really  taken for granted the role which most actresses would consider an acting playground and a role of a lifetime. It is interesting that the second season will have an unprecedented full cast change, since all of the characters have been killed in the first one or have grown up and will be played by older stars. Caner Cindoruk, Burak Yamantürk, Metin Akdülger,

Farah Zeynep Abdullah, Naz Elmas are just some of the stars I've heard could play Kosem's grown up princes and princesses and courtiers in the new season which should return this Autumn.


TOBY SANDEMAN IS
MOROCCAN PRINCE IN 'ROYALS'
Speaking of royal courts, E!'s first scripted series ever which has set December 4th for the return in its third season, THE ROYALS has just cast Toby Sandeman as a Moroccan prince!

Sebastian is described as being articulate and cerebral and has fully embraced everything that comes with being a contemporary royal including the scrutiny and attention it brings. He joins Elizabeth Hurley, Tom Austin and William Moseley in the popular drama.
NBC BUYS 'THE ARK' SF DRAMA
Meanwhile, NBC has bought a high concept sf drama THE ARK a modern retelling of the Noah’s Ark story from the Bible, following an engineer who, after the death of his wife, has a vision to construct a ship capable of sustaining life in space. When the build happens to coincide with the coming end of the world, the engineer realizes there may be a larger story at play.
BBC TO TURN 'THE MINIATURIST' INTO MINI SERIES 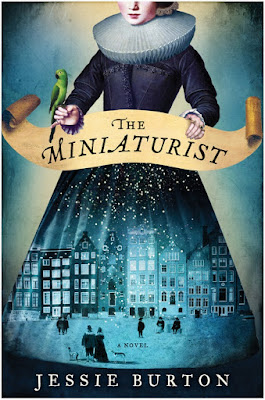 Across the pond, British national broadcaster BBC has announced that they're making a new period set series. They will adapt Jessie Burton's THE MINIATURIST into a three part series! The 2014 bestseller is set in 1686 with the story revolving around eighteen year old Nella Oortman, who arrives in Amsterdam to become the wife of wealthy merchant Johannes Brandt. She receives a wedding gift of a doll's house from a mysterious Miniaturist, which she soon realises is mirroring the situation in her house, and predicting the future in unnerving ways.
Posted by DEZMOND at 6:12 PM