'GENIUS' EINSTEIN TV SERIES
CASTS EMILY WATSON, SETH GABEL, VINCENT KARTHEISER
Remember how just a week or so ago I told you that National Geographic is preparing GENIUS series on Einstein? Now lead star Geoffrey Rush has been joined by a really strong

cast including Emily Watson, Vincent Kartheiser, Seth Gabel, Samantha Colley, Michael McElhatton...
Each of the ten episodes will explore Einstein’s extraordinary scientific achievements, along with his volatile, passionate and complex personal relationships as an imaginative, rebellious patent clerk, who couldn’t get a teaching job or a doctorate, unlocked the mysteries of the atom and the universe. Seth Gabel will play his confidante Michele Besso; Colley portrays Serbian scientist Mileva Maric, who later became his first wife and many believe she came up with most of his theories. Vincent Kartheiser will  be a consulate official in Berlin. Rush and Johnny Flynn play Einstein at different ages. 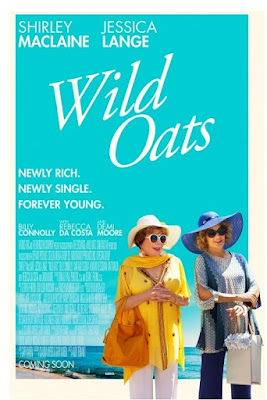 The only trailer I have for you this Monday, along with the first poster, is for comedy movie WILD OATS in which Shirley MacLaine plays a retired widow who hits the jackpot when she receives a life insurance check mistakenly made out for $5,000,000 instead of $50.000. She and her best friend, played by Jessica Lange, then take off, only to become media sensations and fugitives from justice. Billy Connolly, Demi Moore, Judd Hirsch and Stephanie Beacham round up the senior cast of the movie!