MARGOT ROBBIE TO DO DEATH DEFYING STUNTS AS 'QUEEN OF THE AIR'! 'THE GREAT GILLY HOPKINS' TRAILER WITH KATHY BATES,GLENN CLOSE, OCTAVIA SPENCER

MARGOT ROBBIE TO JOIN
CIRCUS AS 'QUEEN OF THE AIR'

After running through jungle with Alexander Skarsgard in Tarzan this summer, it seems Margot Robbie will now be flying through air as well! As 'Deadline' reports today she has taken the lead role in period set biopic QUEEN OF THE AIR based on Dean N. Jensen’s 2013 book of the same name!
The movie will bring us the story of famed trapeze artist Lillian Leitzel and her tragic romance with fellow acrobat Alfredo Codona. The German born Leitzel became a sensation in the 1920s for her death defying stunts, eventually entering into a famously volatile love affair and marriage with Codona. She died tragically in 1931 during a live performance when her rigging snapped; Codona died 6 years later in a shocking Long beach, California set murder suicide.


'GREAT GILLY HOPKINS' TRAILER
WITH KATHY BATES, GLENN CLOSE AND OCTAVIA SPENCER
The first trailer has been released for the movie adaptation of Katherine Peterson's novel THE GREAT GILLY HOPKINS out this Autumn in cinemas! 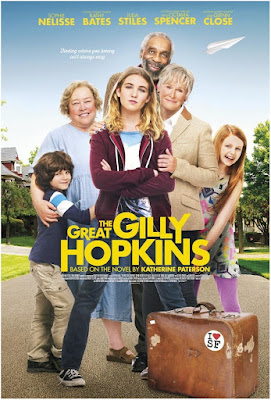 Attitude's got a new name in twelve year old Gilly Hopkins (Sophie Nélisse) - a brilliant, brash, and totally unmanageable foster kid who's determined to alienate herself from every foster family she's placed with - until there's no choice but to let her reunite with her real mom (Julia Stiles) in San Francisco. When she's placed with Maime Trotter (Kathy Bates), the strangest foster mom yet, Gilly is convinced she'll make short work of her - until to Gilly's surprise and the surprise of everyone around her, except for Trotter, she starts to love her. But then her new home is invaded by the arrival of her biological grandmother (Glenn Close). Will Gilly have to leave the only family she's ever loved? Octavia Spencer and Billy Magnussen also star.