'THE SEA OF TREES' TRAILER
WITH MATTHEW MCCONAUGHEY, KEN WATANABE, NAOMI WATTS
It's a very boring Saturday, people, and the only thing the spy has to show you is the first trailer and also first posters for Gus Van Sant's new drama movie THE SEA OF TREES 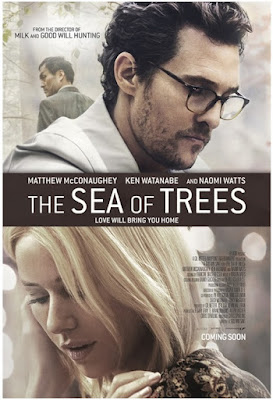 starring Matthew McConaughey, Ken Watanabe and Naomi Watts. The movie is opening this week around Europe after it got booed at Cannes Film Festival.


SUICIDE FOREST
Arthur Brennan (Matthew McConaughey) treks into Aokigahara, known as THE SEA OF TREES, a mysterious dense forest at the base of Japan's Mount Fuji where people go to commit suicide (it really exists with an average of three suicides a week). On his journey to the suicide forest, he encounters Takumi Nakamura (Ken Watanabe), a Japanese man who has lost his way after attempting

suicide. The two men begin a journey of reflection and survival, which affirms Arthur's will to live and reconnects him to his love for his wife (Naomi Watts).