SERIES
We're all British today, starting with the news coming from Starz who, as you know, have took over WHITE QUEEN series sequel from BBC and are doing WHITE PRINCESS second season on their own. Now they have the lead star! Jodie Comer (Doctor Foster) will lead the adaptation of Philippa Gregory's book following the War of Roses!
THE WHITE PRINCESS now follows the beautiful eldest daughter of Edward IV and Elizabeth Woodville (played by Max Irons and Rebecca Ferguson in the original series) princess Elizabeth. She faces a conflict of loyalties between the red rose and the white. Forced into marriage with Henry VII, she must reconcile her slowly growing love for him with her loyalty to the House of York, and choose between her mother’s rebellion and her husband’s tyranny. Then she has to meet the Pretender, whose claim denies the House of Tudor itself.


KEELEY HAWES' THE DURRELLS
ARE GETTING A SECOND SEASON!
After receiving tons of love from the British audience which await each Sunday with huge anticipation to see a new episode of ITV's THE DURRELLS series, it has been announced today that the drama will be

getting a second season as well! Starring gorgeous Keeley Hawes the drama follows the Durrell family who back in 1935 decide to move from 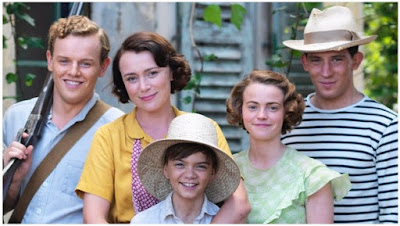 dreary Bournemouth to the sunshine of the Greek island of Corfu! It is an adaptation of Gerald Durrell's book My Family and Other Animals.
Posted by DEZMOND at 8:00 PM