The story of the series will reveal London life against the backdrop of WW2 and the impact it has on families, politics, relationships and work across every social strata. The story will unspool through the eyes of journalist Joe O’Hara visiting the bustling and glamorous five-star hotel! The series will be filled with music including a Beverly Knight performance. 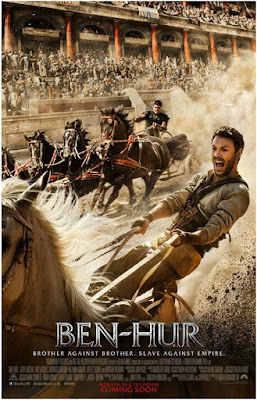 New poster with the legendary chariot scene has been revealed for the remake of BEN HUR out this August! It follows Judah Ben-Hur (Jack Huston), a prince falsely accused of treason by his adopted brother Messala (Toby Kebbell), a Roman army officer. Stripped of his title, separated from his family and the woman he loves (Nazanin Boniadi), Judah is forced into slavery. After years at sea, Judah returns to his homeland to seek revenge, but finds redemption! Morgan Freeman plays his mentor, while Rodrigo Santoro is Jesus Christ!
Posted by DEZMOND at 7:39 PM