Although only a brief time ago I've reported that Kate Winslet will star in Yorgos Lanthimos period set drama THE FAVOURITE, it seems that after she accepted the role in WW2 movie THE LIVES OF LEE MILLER, her role might go to Rachel Weisz who already worked with the director on THE LOBSTER. She would play countess Sarah, THE FAVOURITE confidante of Olivia Colman's Queen Anne while Emma Stone would be an impoverished, distant relative of Sarah, who gains a position at court tending to the Queen! Weisz already has another period set movie MY COUSIN RACHEL among her future projects.

THE PLOT OF THE MOVIE
The movie follows the political machinations and the fight for influence at the court, behind the scenes during the reign of Queen Anne, the last monarch of the House of Stuarts, taking place between the end of the 17th century and first years of the 18th century!

'LOVE THE COOPERS' TRAILER
DIANE KEATON, JOHN GOODMAN, ED HELMS, AMANDA SEYFRIED, OLIVIA WILDE ALL STAR!
A new trailer and a poster have been released for Christmas family comedy LOVE THE COOPERS which is out next month following the titular family who gather to celebrate the holidays together bringing all 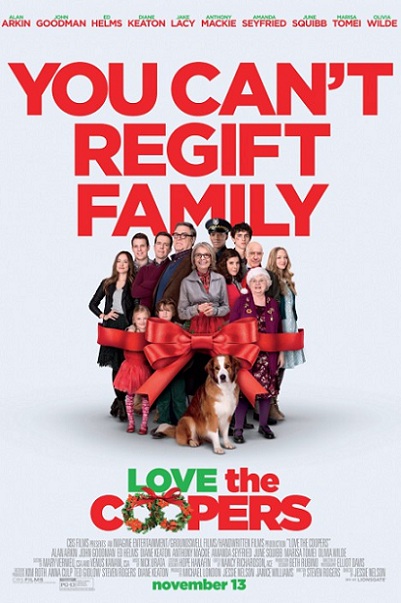 kinds of secrets with them which will turn everything upside down. John Goodman, Amanda Seyfried, Ed Helms, Olivia Wilde and Diane Keaton star!
Posted by DEZMOND at 1:20 PM