EMILIA CLARKE
IN ROSALINE
Are you enjoying the glorious rise of Daenerys Stormborn the Dragon Queen in GAME OF THRONES? We do love her dragon gorgeousness, don't we? Emilia Clarke, who plays her, has a new gig: now that ROSALINE, the movie adaptation of Rebecca Serle's bestseller WHEN YOU WERE MINE has moved from Fox to Universal, instead of Lily Collins and Deborah Ann Woll, the roles of Julia and Rosaline will go to Emilia Clarke (who recently ended her hot fling with Seth MacFarlane) and Allison Williams (GIRLS). Dave Franco could play Romeo in this revisionist look on Romeo and Juliet story this time told from the perspective of Rosaline, Juliet's cousin who was Romeo's first love which he dumped after meeting Juliet. Michael Sucsy from THE VOW is directing.


HERCULES 3D EPIC POSTER
WITH KELLAN LUTZ
Here's something fresh for you: the first poster for upcoming epic adventure HERCULES 3D which will hit cinemas next February with Kellan Lutz in the lead 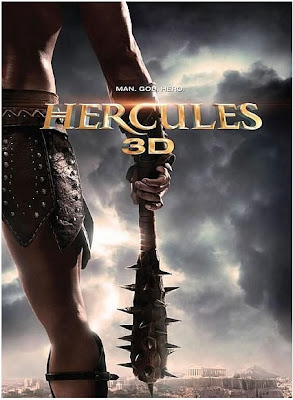 role! Unlike the rival Hercules project with   Dwayne Johnson, Rufus Sewell, Joseph Fiennes, Rebecca Ferguson and Ian McShane which will portray him as a mercenary and will not have mythological elements, Kellan Lutz's version is a historical love story in which Hercules is falling for the mortal princess of Crete, who was promised to his older brother. This one will be cheaper with $70 million budget. Liam McIntyre from SPARTACUS will play young army captain Sotiris, who is initially an antagonist of the mythical hero Hercules. The two of them become close friends before being sold into slavery by a treacherous king.


TURBO ANIMATED FILM
CHARACTER POSTERS!
Funny character posters have arrived for Dreamworks' new animated film TURBO which is out this October! Introducing the fastest snail on the planet (Ryan Reynolds), the film will also have  Whiplash 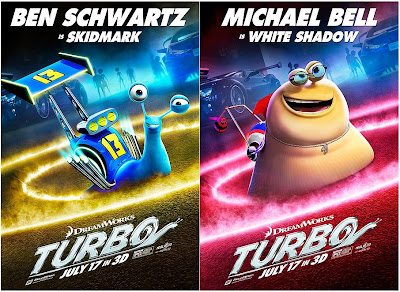 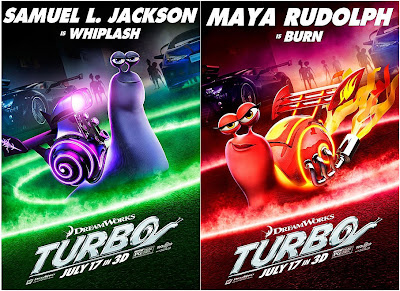 dream: to win the Indy 500. When a freak accident gives him extraordinary speed, Turbo sets out to try to make this dream come true!
Posted by DEZMOND at 12:00 AM