TOTEM by Jiang Rong which took 30 years in writing and won famous Man Prize (that's Asian Booker). Click for the Serbian cover. Now amazing director Jean Jacques Annaud is adapting the novel for the big screen! According to THR Chinese stars Feng Shaofeng and Shawn Dou Xiao will take the lead roles in the French Chinese co production. Feng will play a student being sent down to work in the Inner Mongolian steppes during China's Cultural Revolution, and whose new way of life is thrown into chaos as an apparatchik orders the killing of all wolves living in the area. He saves one of the baby wolves and the saga then follows him raising the cub, learning to live with the nature in the traditional way of the steppes scorched by boiling summers and freezing winters with no electricity nor houses. The novel also depicts how the destruction of the steppes lead to today's Beijing being whipped by sandstorms coming from the deserts where once lush green fields were. This is also a chance for Annaud to redeem himself in China since he was banned there for many years due to his depiction of the Chinese people in his infamous film SEVEN YEARS IN TIBET!

Meanwhile, over at AMC, according to Deadline, Ridley Scott's production company is preparing some great new shows! I've already written about THE TERROR which is set in 1847 and follows the crew of a Royal Naval expedition in search of the Arctic’s treacherous Northwest Passage. Instead, they discover a monstrous predator that stalks the ships in a desperate game of survival, which could threaten the region and its native people forever. Ridley is also preparing an untitled futuristic, dystopian, sci-fi saga from the producers of FRINGE and THE WALKING DEAD, and RAIDERS, a WWII drama about a rogue U.S. Navy commander who leads an unconventional warfare unit into the heart of Africa on a mission that will bend the arc of history. Ridley's company is also preparing VATICAN show for Showtime and CLONDIKE for Discovery Channel. 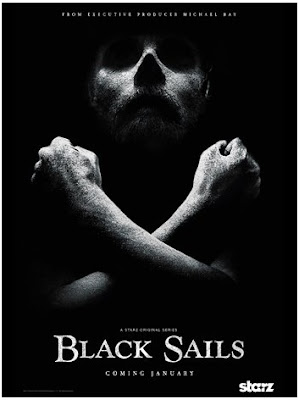 primetime from SPARTACUS. Produced by Michael Bay it is sort of a prequel to famous TREASURE ISLAND story and it revolves around Captain Flint (Toby Stephens) and his men with the whole plot being set 20 years before Robert Louis Stevenson's original story. The series will feature Flint, the most feared pirate of his day, as he expands his ranks and adds John Silver (Luke Arnold) to his crew. The eight part series also has MERLIN's Tom Hopper in the cast alongside Zach McGowan, Hannah New and Jessica Parker Kennedy!
Posted by DEZMOND at 12:00 AM