I wanted to indulge you this boring Monday with some hot pics and hot news, but since there weren't any interesting ones, I must entertain you with two new trailers released in last few days. 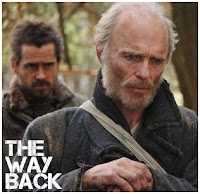 The first one is for Peter Weir's (GALLIPOLI, THE YEAR OF LIVING DANGEROUSLY, THE TRUMAN SHOW) new film THE WAY BACK. This epic movie with epic music, epic cinematography and epic story, starring Colin Farrell, Jim Sturgess, Ed Harris, Mark Strong and Saoirse Ronan, is inspired by a true story about a group of prisoners who escaped a Gulag in Siberia in 1940 and traveled over 4000 miles across some of the most dangerous terrain in the world, facing blizzards, cold, wolves, desert heat in order to save their lives and get home. The film is out in USA on December 29.

The trailer for suspense thriller AND SOON THE DARKNESS has also been released, and I'm posting it just because Karl Urban is my favourite actor, the film itself seems cliche. Stephanie (Amber Heard) and Ellie’s (Odette Yustman) go to an exotic village in Argentina to bask 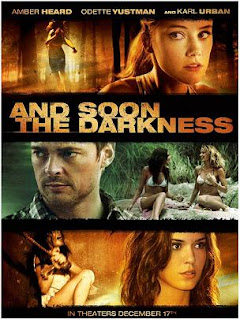 in the sun, shop and flirt with the handsome locals. After a long night of bar-hopping, the girls get into an argument, and Stephanie heads out alone in the morning to cool off. But when she returns, Ellie has disappeared. Finding signs of a struggle, Stephanie fears the worst, and turns to the police for help. But the local authorities have their hands full already – with a string of unsolved kidnappings targeting young female tourists. Skeptical of the sheriff's competency, she enlists help from Michael (Karl Urban), an American ex-pat staying at their hotel. Together they go on a frantic search for Ellie, but Stephanie soon realizes that trusting his seemingly good intentions may drag her farther from the truth. With danger mounting, and time running out, Stephanie must find her friend before darkness falls.
Posted by DEZMOND at 1:14 PM