HOLLYWOOD SPY has already mentioned the SNOW WHITE AND THE HUNTSMAN project, but now it seems Relativity Media has found themselves the cast headliners: two very sexy people - Tom Hardy who will play the Huntsman (he will also play a new villain in BATMAN) and Angelina Jolie who is supposed to portray the evil queen who sets the Huntsman after her
stepdaughter, Snow White, with orders for the Huntsman to kill her but instead, he becomes her mentor, shackled to Snow White for much of the story as they make their escape. As you can

see from my pics, both Angelina and Tom like showing tattoos and breaking taboos :)Did I just make your day? :)

Now, admit that you've always wanted to visit the famous ACME factory from which that darling genious Wile E. Coyote buys his gear and gadgets :))) Well, Warner Bros. is going to make a feature film centered around the fictional ACME warehouse which manufactures all the silly products used by glorious Wile E. Coyote in his quest to catch the Road Runner. The studio wants to make a live-action CG hybrid franchise about those crazy devices which will not feature the Looney Tunes characters. 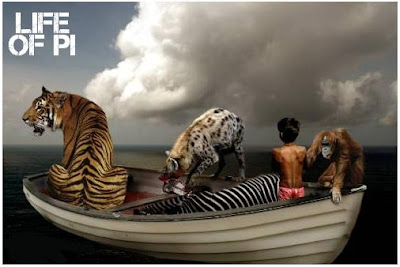 According to "Variety" director Ang Lee has cast 17-year-old newcomer Suraj Sharma as the lead actor in his film adaptation of the worldwide bestseller LIFE OF PI by Yann Martel. The intriguing story centers on a boy lost at sea in a lifeboat with four unusual and increasingly hungry companions - a Bengal tiger, a hyena, a zebra and an orangutan, after the ship carrying his family and its zoo animals sinks.
Posted by DEZMOND at 2:15 PM