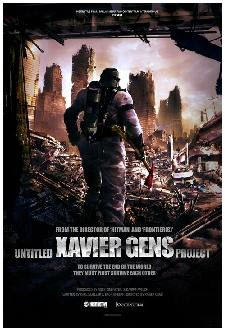 to give us an early look at his movie. It follows people who panic when a building starts shaking. When they try to get out of the place, someone is seen closing a door and leaving the survivors trapped inside the building. The story is set in New York, which is virtually destroyed in a mysterious explosion in the first act. Eight survivors take refuge in the fallout shelter of an apartment building, where they are menaced first by mysterious men in HazMat suits and eventually by each other. The cast is lead by Milo Ventimiglia ("Heroes"), Michael Biehn ("The Terminator") and Rosanna Arquette.