Here's a great historical story for a Sunday afternoon, Hawaiian historical biopic "Princess Ka'iulani" a breathtaking romance about an unlikely heroine and her unwavering fight to defend the independence of her people. 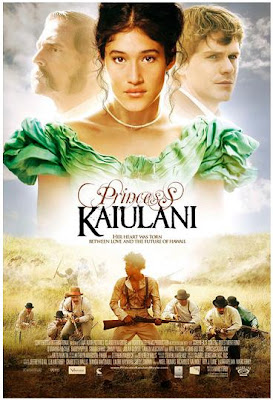 In 1888, Hawaii was a paradise teetering on the brink of civil unrest. The tide had turned against the long-incumbent royal family, under the malevolent influence of a rebel party with links to the American government. Within months, the Palace was overthrown, and the royals exiled. Among them was the beautiful Princess Kaiulani (Q'orianka Kilcher). Scarcely 13 years old, she was separated from her family and her homeland and for her own safety, sent to a climate and a country that couldn’t be more different from Hawaii - Victorian England. Coming to terms with her fate, Kaiulani underwent a harsh and testing education that equipped her with a sense of honor, duty and pride. What's more, she fell in love, with the spirited and rebellious young Englishman, Clive Davies. Emerging from her childhood, and inspired by her blossoming romance, Kaiulani realized she had to bring an end to the injustices suffered by her people and set to sail for America, to meet President Grover Cleveland, to prove that she and her people were not the “barbarians” portrayed by the American press (the proof how American government's attitude toward other countries which they see as barbarian was and is always the same, hm?).
Starring also Barry Pepper and Will Patton, "Princess Kaiulani" combines the profound natural beauty of Hawaii with the sweeping romance of a classic Merchant Ivory epic.
Posted by DEZMOND at 5:43 PM