VOTE FOR SERBIA TOMORROW AT 2010 EUROSONG IN NORWAY

As most of you know, the EUROVISION SONG CONTEST finale is on Saturday evening in Oslo, Norway, and according to journalists there and the fans, the main favourite to win is Milan Stankovic from Serbia. After getting the tittle of the most refined country at Eurosong in last decade, thanks to three powerful ballads we've sent to previous Eurosongs, Serbia has decided to send a faster song this year, and it seems it worked again. 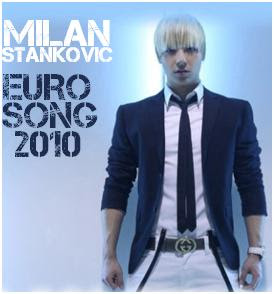 So if you are one of the HOLLYWOOD SPY's readers living in one of the European countries, vote for Milan and his song OVO JE BALKAN :).
To remind you, Serbia first appeared at Eurosong as an independent country in 2004 and immediately amazed whole Europe with Zeljko Joksimovic's stunning ballad LANE MOJE which ended up in a second place after losing the victory with just a few points and it became one of the biggest Eurosong hits ever. But the justice was satisfied when Marija Serifovic brought victory to Serbia at Eurosong 2007 with another stunning ballad MOLITVA. After that, Jelena Tomasevic sang ORO in Eurosong held in Belgrade, and won a high 6th place. So help Serbia secure the high place again and vote for Milan and his charming and cheerful song full of positive energy and love. He performs as song number 8 in tomorrow's finals.