Now this is an interesting casting. According to "Heat Vision" Colin Farrell and Toni Collette will star in DreamWorks' remake of the 1985 comedy horror "Fright Night". Young Anton Yelchin has already signed on to star in this film directed by Craig Gillespie, which will tell the story of a teenager (Anton Yelchin) who is convinced that his new neighbor is a vampire, though no one will believe him. 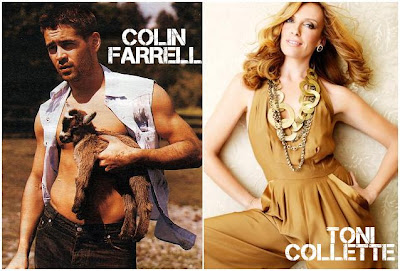 Collin Farrell will portray the dashing vampire preying on the neighborhood while ultra talented Toni Collette will appear as Yelchin's mom, who at first disapproves of the new arrival but changes her attitude when she meets the magnetic man and, what a surprise, doesn't believe her son when he tries to tell her Jerry is a vampire.
Posted by DEZMOND at 9:24 PM