Now this was bound to happen sooner or later. After all the wild nights spent partying in popular Belgrade clubs, Gerard Butler, who is currently filming Ralph Fiennes' 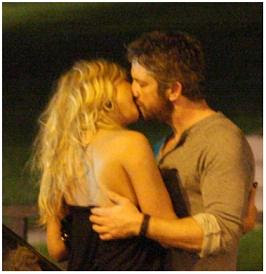 movie „Coriolanus“, has been finally caught red handed. Serbian paparazzi have caught him kissing a blond beauty last evening in Belgrade. The blond is probably, a Serbian model Martina Rajic. She bragged last week in Serbian newspapers how they are having a fling, and the whole country laughed at her claims, but the girl now has a proof as you can see in the picture above. Well, at least they look nice together, and at least Gerry isn't bored in Belgrade. Check out the video from one of Serbia's most popular singers Milan Stankovic in which you can see Gerard's new love interest. Marina is the blond girl with monster fingernails in the video.