MEGAN FOX KICKED OUT OF "TRANSFORMERS", GEMMA ARTERTON TO REPLACE HER

Oh, these sure are some spicy news. Paramount and Michal Bay have decided to kick naughty Megan Fox out of the "Transformers" franchise, and to give Shia Le Beouf a new love interest which would make more sense for the story. As you know Megan had a lot of sharp and imprudent statements about Michael Bay comparing his directorial approach to Hitler, so it was more or less obvious that she has closed the doors leading her to "Transformers 3" with her own hasty remarks. But according to "Variety" the decision was unrelated to those remarks. 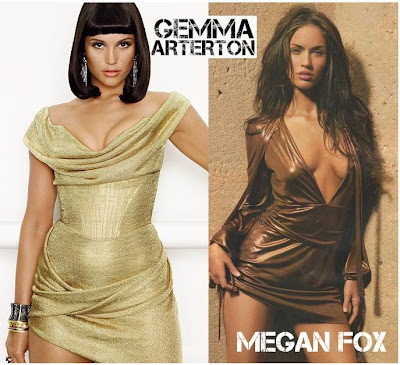 As expected, the studio and Bay are not crying after Megan, and according to first rumors, Bay has already had a talk with Gemma Arterton ("Clash of the Titans", "Prince of Persia: Sands of Time") about the lead role. According to "The Wrap" she could compete for the main female role with model/actresses Miranda Kerr, Brooklyn Decker and Bar Rafaeli.
Posted by DEZMOND at 9:21 PM