It seems that the period movie about the famous composer "Vivaldi" is finally moving ahead, with Jessica Biel and Luke Evans in talks for the lead roles. The film will center on a forbidden romance that develops between composer, priest and violin virtuoso Antonio Vivaldi and his protege, singer Anna Tessieri Giro, leading him to write his enduring masterpiece "The Four Seasons". Giro was Vivaldi's favorite prima donna and part of his entourage. Vivaldi at the time denied any romantic relationship, and most modern scholars believe that to be true. 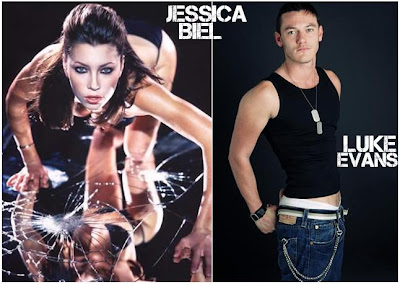 The movie is set to premiere in 2011 and many previous reports announced Joseph Fiennes, Alfred Molina, Malcolm McDowell, Neve Campbell and Gérard Depardieu as members of the cast, but I'm not sure if they are still in the run. As you know, you will watch Jessica this summer in the action flick "The A-Team", while we've mentioned young Luke Evans recently as Apollo in "Clash of the Titans" and as Zeus in Tarsem Singh’s upcoming Greek epic "Immortals".
Posted by DEZMOND at 9:47 PM