In recent few days we've heard about a whole bunch of new actors joining the cast of DreamWorks' sf adventure "I Am Number Four". Helmed by D.J. Caruso it will tell a story about a group of nine earthbound aliens who escaped their planet just before it was annihilated by a rival species. Hiding out on Earth, disguised as a human teenager in high school, the title character discovers that he is being hunted by the enemy that destroyed his planet.

Kevin Durand will play "The Commander" who chases aliens Number Four (Alex Pettyfer) and Number Six (Teresa Palmer) to Earth from their alien planet. Gorgeous Dianna Agron from "Glee" has also signed on for a role in the film. Young Callan McAuliffe will play the role of Sam, who becomes Number Four's best friend. The script of the fantasy action was written by the creators of popular TV show "Smallville". 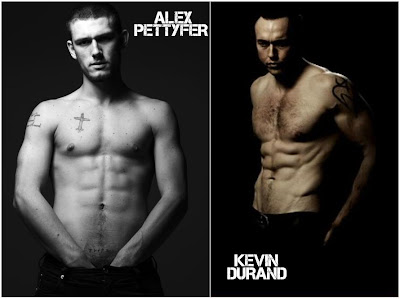 You will be seeing charismatic Alex Pettyfer this summer in "Beastly", while gorgeous Australian actress Teresa Palmer will appear in "The Sorcerer's Apprentice" and is connected to "Mad Max 4" as well. You can watch good old Kevin Durand this summer in "Robin Hood" as Little John.
Posted by DEZMOND at 6:36 PM