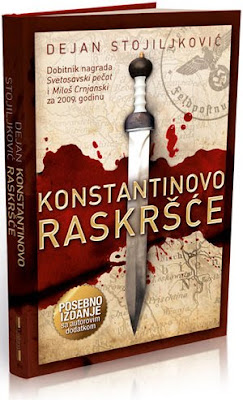 search for the sword of emperor Constantine, which was forged from the nails which had been used to crucify Jesus Christ. But since the movie will cover a great period in history following the destiny of the mysterious sword, there will be many magnificent scenes depicting great moments from ancient history: emperor Constantine's rule from his imperial city Naisus in Serbia, the legendary meeting of the Holy Roman emperor Friedrich Barbarossa and his 100,000 crusaders with Serbian king Stefan Nemanja in medieval Serbia .....
The producers are planning to make a visually stunning and rich movie, and the author of the book has already mentioned that he would like Kevin McKid in the role of emperor Constantine. As you know, Constantine was one of the 16 Roman emperors who were born in Serbia in one of the many imperial Roman cities spread around ancient Serbia. One of the goals of the movie is to promote Serbian history and also the jubilee of the Milan Edict, a letter signed in year 313, by emperor Constantine that proclaimed religious tolerance in the Roman Empire, after which Christianity rose to become the dominant religion in Rome.
Posted by DEZMOND at 2:13 PM