KATE WINSLET IS
GLAMOROUS 'THE DRESSMAKER'
One of the delightful movies which await us sometime next year is Kate Winslet's THE DRESSMAKER which will be based on Rosalie Ham's best selling novel with the story following femme fatale Tilly Dunnage who returns to her small home town in the country to right the wrongs of the past. A stylish drama with comic undertones about love, revenge and haute couture will see Kate Winslet playing a glamorous woman returns to her small town in rural Australia. With her sewing machine and haute couture style, she transforms the women and exacts sweet revenge on those who did her wrong. Judy Davis is also starring.


A LITTLE CHAOS
Before she starts making dresses, we shall watch Kate Winslet in A LITTLE CHAOS. Starring next to Alan Rickman (who also directs), Stanley Tucci, Matthias Schoenaerts she plays a female landscape gardener awarded the esteemed assignment to construct the grand gardens at Versaillers, a gilt-edged position which thrusts her to the very centre of the court of King Louis XIV.

'TRIPLE NINE' CRIME DRAMA
And the cast for next year's crime thriller TRIPLE NINE keeps getting more star studded: THE WALKING DEAD's Norman Reedus is the latest name added to the ensemble which already includes the above mentioned Kate Winslet alongside Aaron Paul, Woody Harrelson, Gal Gadot, Theresa Palmer, Anthony Mackie, Casey Affleck, Chivetel Ejiofor! With the title being a police code for 'man down' the movie will revolve around a group of cops who are blackmailed by the mafia to pull off an impossible heist, but they realize that the only way to do so is by setting up a fellow officer to be killed, although their plan backfires when the rookie cop they set up to die foils their attack.


'SEX TAPE' TRAILER
CAMERON DIAZ & JASON SEGEL
Meanwhile, your trailer for today will bring you a SEX TAPE recorded by Cameron Diaz and Jason Segel. Cameron reunites with BAD TEACHER director Jake Kasdan in this raunchy comedy  which sees the pair play a married couple who discover that a sex tape 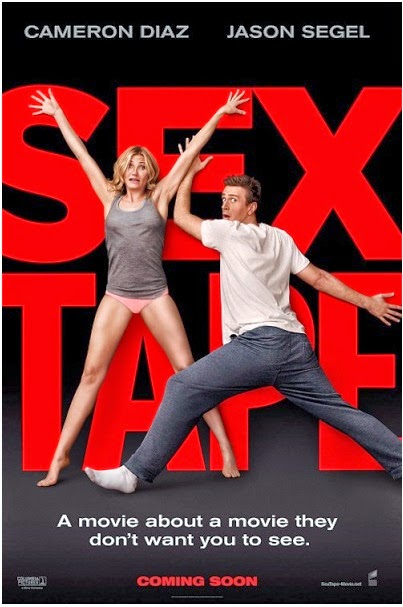 they made has gone missing. When they later discover it's been uploaded to 'the cloud', they set off on a frantic search to remove all traces of it. Hitting cinemas this July the movie also stars Rob Lowe, Rob Corddry, Ellie Kemper and Jack Black!
Posted by DEZMOND at 2:10 PM