While you are waiting for the mutants to hit the big screens in X MEN DAYS OF FUTURE PAST soon, the fresh gossip today says that Channing Tatum is being considered for the role of GAMBIT in a spin-off movie from the mutant saga! The actor, who is one of the last of the young Hollywood hunks not to have a superhero role in his CV, has revealed that he has actually spoken with the producers about this role. The X MEN producer Lauren Shuler Donner has confirmed earlier that she would love to do the film with Tatum in the lead role. Hugh Jackman has, meanwhile, recently said that if he leaves the saga he would want Channing as the new Wolverine.


DID YOU KNOW?
Gambit is a mutant from New Orleans with burning red eyes who has the mutant ability to tap into the potential energy contained within an object and transform it into kinetic energy upon touching it. When Gambit thus charges an object and throws it at a target, the object releases this energy explosively on impact. This gives him superhuman agility and dexterity, and shields his mind from detection and intrusion by even the most powerful telepaths.

Speaking of superheroes, Colton Haynes, who plays ARROW in CW's show, has just joined Dwayne Johnson and Carla Gugino in SAN ANDREAS earthquake disaster adventure movie.  Set in the aftermath of a massive earthquake in California, the story of the movie will follow a rescue-chopper pilot (Dwayne Johnson) who makes a dangerous journey across the state in order to rescue his estranged daughter (Alexandra Daddario). Brad Peyton, who already worked with Dwayne on JOURNEY 2 THE MYSTERIOUS ISLAND, is directing.

Our trailer for today is the first international one for ensemble drama THIRD PERSON which stars Olivia Wilde, Mila Kunis, Liam 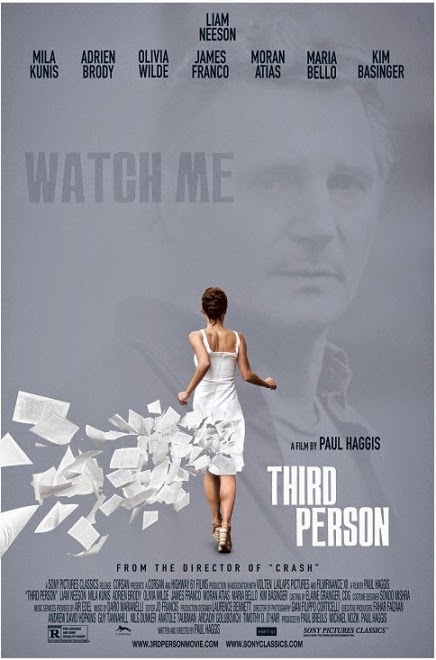 Neeson, James Franco, Maria Bello, Kim Basinger and Adrien Brody! The film wends its way through three cities and three tales. The various stories, situated in Paris, Rome, and New York, are, at first glance, all separate, but they all concentrate on three men and their romantic entanglements. Gradually, each one of these stories unveils its secrets, testifying to the whims and complexities of life. As each story is explored we discover untold pleasures and pains. Life is never easy: it can be deceptive, inhabited by anger and jealousy, but it can also be surprisingly joyous.
Posted by DEZMOND at 2:10 PM