Here's yet another interesting historical TV series we can look forward to: Tom Hardy has been hired to topline BBC's new historical series TABOO a 19th century drama to be shot in eight episodes! The story will be set in 1813, and is centred around an adventurer who returns to England from Africa along with 14 stolen diamonds, while seeking revenge over the death of his father. He refuses to sell the family business to the East India Company, and aims to build his own trade empire, before finding himself involved in a battle between Britain and America. Planned as a flagship British drama produced by Ridley Scott, it will be a hybrid of orthodox and unconventional storytelling, packed with darkness and spirited characters! The shooting of the epic series will start next January.


'THE WOMAN IN GOLD'

RYAN REYNOLDS & HELEN MIRREN
After a whole week spent on lovely Hollywood ladies, we're focusing on something more hunky for my female readers today: according to 'Deadline' Ryan Reynolds has joined the cast of THE WOMAN IN GOLD movie which I announced some time ago when it was revealed that Helen Mirren will take the lead part of Maria Altmann, who was a Jewish survivor of World War II and who took action against the Austrian government to retrieve multiple stolen Gustav Klimt paintings which belonged to her family together with the famous THE WOMAN IN GOLD. Ryan Reynolds will portray her lawyer while Daniel Bruhl will be the legal representative of the state of Austria. 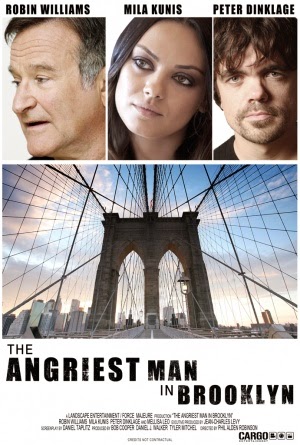 Our last trailer this working week is the first one for THE ANGRIEST MAN IN BROOKLYN a drama starring Robin Williams as Henry Altmann who is having a horrible day, made much worse by his visit with Dr. Sharon Gill, who abruptly informs him that he only has 90 minutes to live. After storming out of the hospital in disbelief, Henry panics and races through Brooklyn in an attempt to right all of the wrongs in his life, while Sharon desperately scrambles to find him and get him into surgery! Releasing anger onto streets this May, the movie also stars Mila Kunis and James Earl Jones!
Posted by DEZMOND at 2:20 PM