'MARCO POLO' 13TH CENTURY
FANTASY ADVENTURE MOVIE
While we are following the production of luxurious Netflix historical TV series on MARCO POLO which will have Lorenzo Richelmy in the lead role, Paramount has

teamed up with China Film to produce a big screen movie on the famous adventurer! According to 'Deadline', with the plan to conquer world market,  the movie adaptation will be based on historical context of the famed 13th century explorer but, differently from the upcoming TV show, it will go beyond the traditional “biographic” type story by also using fantasy elements. Although no names have been revealed so far, the director will be an experienced action adventure moviemaker from USA with A league actors both from USA and China in the cast.

DEZZY'S HISTORY LESSON
Real Marco Polo, the Italian merchant, was inspired to go to Asia by the stories of his uncles who apparently met Kublai Khan. He went on a journey with them which lasted incredible 24 years. Instead of a welcome, after his return he was imprisoned for almost five years. During his stay in the dungeon he dictated his stories to a cellmate. 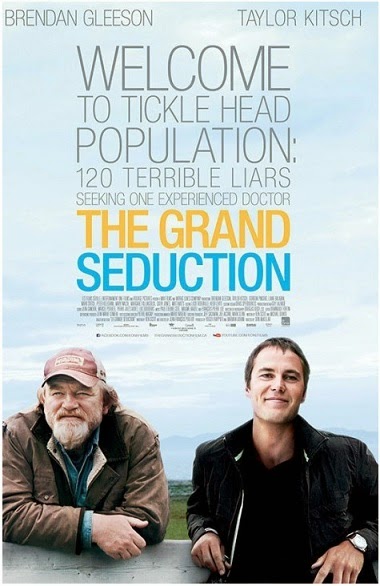 Here's a delightful trailer for you today: to be released into cinemas May 30th THE GRAND SEDUCTION is a lovely comedy movie starring Taylor Kitsch and Brendan Gleeson. It is set in a small fishing village which must procure a local doctor to secure a lucrative business contract. When unlikely candidate and big city doctor Paul Lewis lands in their lap for a trial residence, the townsfolk rally together to charm him into staying. As the doctor’s time in the village winds to a close, acting mayor Murray French has no choice but to pull out all the stops and begin The Grand Seduction.
Posted by DEZMOND at 2:10 PM